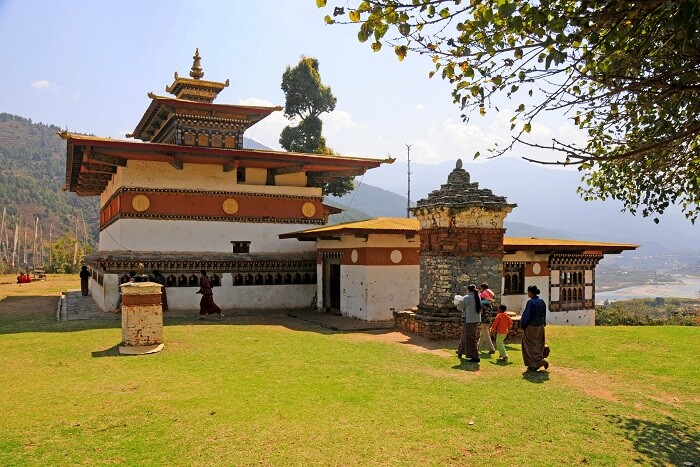 Located near Lobesa, Chimi Lhakhang stands on a round hillock and was built in 1499 by the 14th Drukpa, Ngawang Chogyal, after the site was blessed by the “Divine Madman” the maverick saint Drukpa Kuenley who built a chorten (which is a mound-like structure containing Buddhist relics) on the site. Thousands of people visit Chimi Lhakhang either to pray for children by those who are childless or to seek protection for children that they already have. There are also anecdotes of tourists from the US and Europe who made the pilgrimage to Chimi Lhakhang and promptly got pregnant within a year after the visit. While Chimi Lhakhang is renowned for its fertility blessings, it also fulfils the other religious and spiritual needs of the Bhutanese. Women who come to the monastery seeking blessings of children will get hit on the head by the presiding Lama with a 10-inch ivory, wood and bone phallus as well as the bow and arrow supposedly used by the Divine Madman – Drukpa Kuenley himself hundreds of years ago. To also get the name of the child to be born, women will pick random bamboo slips placed in the altar inscribed with names of boys and girls.

In founding the site it is said that Drukpa Kuenley subdued a demon of Dochu La with his “magic thunderbolt of wisdom” i.e. his penis! And trapped it in a rock at the location close to where the chorten now stands. Around the time when Drukpa Kuenley first visited Bhutan, a Demoness called Loro Duem resided on a high pass presently called Dochu La. She terrorized all who tried to cross the pass and the people in the valley lived in fear. Two more demonesses lived on two smaller passes and the three of them caused people misery and suffering. When Drukpa Kuenley heard of this, he hunted down the Demoness at Dochu La and the three demonesses recognizing Drukpa Kuenley’s power ran down the valley and the other two demonesses dissolved into the body of Loro Duem. When she reached the plains of Lobesa, she transformed herself into a dog to avoid detection. But Lam Drukpa Kuenley recognized the Demoness dog, killed it and buried it under the mound of a hill which he said resembled the breast of a woman. He then said “Chi-med” (no dog), and built a black chorten on top of this mound. Before killing and burying the Demoness, he made the Demoness pledge service to the Buddha and become a protector of the dharma. She is now the local deity called Chhoekim who is the guardian deity of Chhime Lhakhang.

Drukpa Kuenley’s cousin Lam Ngawang Chhogyal later built a Lhakhang in honor of his illustrious relative and named it Chhime Lhakhang. Drukpa Kuenley was known as the “Mad Saint” or “Divine Madman” for his unorthodox ways of teaching Buddhism by singing, humor and outrageous behavior, which amounted to being bizarre, shocking and with sexual overtones. He felt that the stiffness of the clergy and social convention were keeping people from learning the true teachings of Buddha. His outrageous, often obscene, actions and sexual antics were a deliberate method of provoking people to discard their preconceptions. He is also the saint who advocated the use of phallus symbols as paintings on walls and as flying carved wooden phalluses on house tops at four corners of the eves. The monastery is the repository of the original wooden symbol of phallus that Kuenley brought from Tibet. Traditionally symbols of an erect penis in Bhutan have been intended to drive away the evil eye and malicious gossip. As Drukpa Kuenley is one of the most revered and followed saint in Bhutan, his symbol – the phallus can be found in various forms within Bhutanese houses and restaurants. Phalluses of different sizes can also be found in souvenir shops around Bhutan. There are also some creative ways of using the phallus e.g. in the picture below, it is used as a simple door-lock mechanism! The phallus painting is also termed as an institutionalized graffiti. It is seen painted in different designs, and an unusual design seen is one with a dragon riding the phallus. One common feature noticed is that the phallus is always seen ejaculating. Chimi Lhakhang is a 20-minute walk across fields through the village of Sopsokha from the roadside to the small temple located on a hillock in the centre of the valley below Metshina. The path to Chimi Lhakhang can be quite slippery after rain; the best time to visit is Spring/Autumn.

Regardless of whether you believe in the power of the Divine Madman’s blessing or not, Chimi Lhakhang is definitely a serene and beautiful place to visit.

Placed strategically at the junction of the Pho Chu and Mo Chu rivers, the dzong was built in 1637...

In 1757, the 9 th  Je Khenpo Shakya Rinchen, considered to be a reincarnation of Rechungpa, one of the...

This is a wonderful yet strenuous hike through beautiful nature in National Park territory. Combined with a temple visit...

Bhutan’s Punakha valley is famous for rice farming where both red and white rice are grown along the river...

Kabji Hokatsho (Lake) – Visit Farm House This pristine lake is hidden away in the middle of dense jungle...

Punakha Dzong, also known as Punthang Dechen Phodrang Dzong is one of the most beautiful Dzongs in Bhutan. It...

The village of Talo (alt. 2,800m) which is scattered along the hill slopes, known for its cleanliness and hygiene...

Drive towards Punakha Dzong and later walk across the suspension bridge (about 200m long) through absolutely fresh breeze and...

Perched on a ridge amid pine trees and overlooking valleys of Punakha and Wangduephodrang, gleams the magnificent structures of...

Perched high on a hill on the opposite bank of the river, the beautiful Chorten like temple The chorten,...