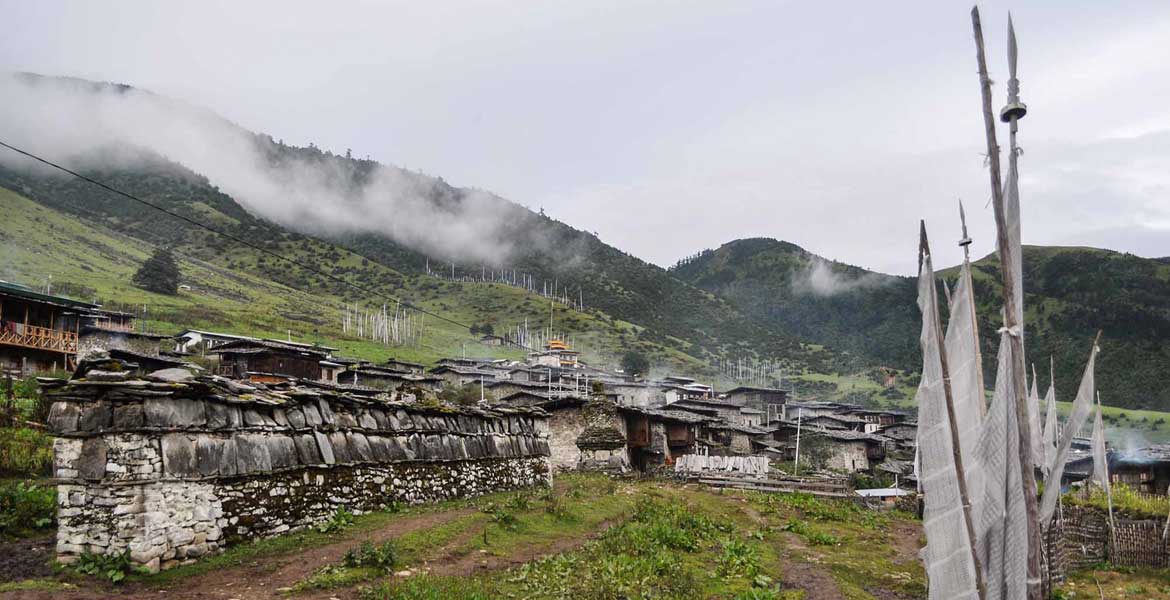 Merak-Sakteng stands out as a distinct attraction in Bhutan. Unlike anywhere else in the country, it offers a visitor to experience a unique semi-nomadic lifestyle, culture and vernacular in one of the most scenic pastoral valleys in the protected area of Sakteng Wildlife Sanctuary (SWS) in Trashigang Dzongkhag (District), in Eastern Bhutan. It is a moderate trek (between 1,500m and 4,100m) traversing through the semi-nomadic villages of Gengu (3400m), Merak (3500m), Sakteng (2800m), Thakthi (2200m), and Joenkhar (1700m). Tour operators are not mandated to use a particular trail but the most common trail usually begins from Chaling and ends in Phongmey. Both these Geogs of Merak and Sakteng are an important watershed for Ngere Ama chu and Gamri chu rivers respectively. The campsites have been designed aesthetically to blend with local architecture and ambiance. Enclosed by a stonewall (with a gate to bring in the ponies to unpack trekking paraphernalia), the campsite is equipped with facilities such as tenting sheds, toilets, kitchens (in some), dining area and water supply. A signage describing the location, altitude, forest type, fauna, additional hiking trails in the locality, distance and time to next camp welcomes a visitor to each campsite.

The trek lies within the Sakteng Wildlife Sanctuary (SWS). It was created in April 2003 with a strong agenda for conservation and to protect the unique assemblage of biological and cultural diversity in the region. It covers an area of 650 km2 and is bordered by the Indian State of Arunachal Pradesh (Tawang) in the north and east, Phongmey Geog and Kangpara Geog in the west, and Shingkhar Lauri Geog in Samdrup Jongkhar. It is connected to Khaling Wildlife Sanctuary by a biological corridor, a part of the Bhutan Biological Conservation Complex (B2C2).