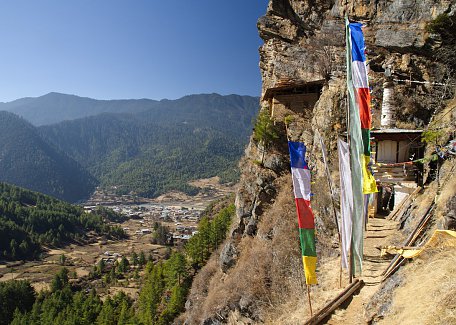 Bjungeydra, which is dedicated to Guru Rinpoche, is situated at 2930 meters above the sea level. One could take any of the three different routes to get to the temple. The travel time to the site would range from half an hour to one hour. There are many sacred sites in the vicinity of Bjungeydra. The local narrate that Guru Rinpoche visited this place and subdued a demon by taking out one of its eyes and one fang. It is believed that the eye and the fang were placed on the cliff and the marks can be seen even today. One can see different naturally formed sacred shapes on the rocks, such as forms of Mahakala, golden and silver bowls, and syllable ‘Ah’. The visitors to this sacred place can also see frowning face of the Guardian of the Gate (sgo srung khro zhal), a stupa of natural rock and the yoni of Dakini. Bjungeydra Nye also houses the right footprint of Mache Lhabdron (1055-1132), a female Tibetan Tantric practitioner. It is believed that her left foot print is at Pelphug/ Paro Taktsang.

A place of importance in the valley is the Shekhar Drak temple that is ensconced at the foot of...

Katsho Gonpa is one of the four bigger temples of Haa. Connected by a 3-KM farm road from Haa...