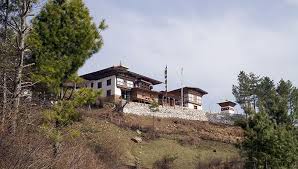 Katsho Gonpa is one of the four bigger temples of Haa. Connected by a 3-KM farm road from Haa town, this sacred temple was founded by Lam Choying Gyatsho, the disciple of Drakpa Gyatsho. A hundred million Mani recitation held for twenty-one days from 13th day of twelfth month to 20th day of first month of the Bhutanese Calendar (Lunar) is the major annual event for the Gonpa. Katsho village has its own history on how it got the name Katsho. It is belived that the first Karmapa Dusum Khyenpa who visited this place in the eleventh century has given the name Katsho. According to the local elders, Karmapa enquired about the crops grown in the village. To this, people replied “kar Tsho”, which means wheat grows well in that place. Following this, Karmapa named the village as Katsho. Locals say that the village was initially called “Atam”.

Bjungeydra, which is dedicated to Guru Rinpoche, is situated at 2930 meters above the sea level. One could take...

A place of importance in the valley is the Shekhar Drak temple that is ensconced at the foot of...