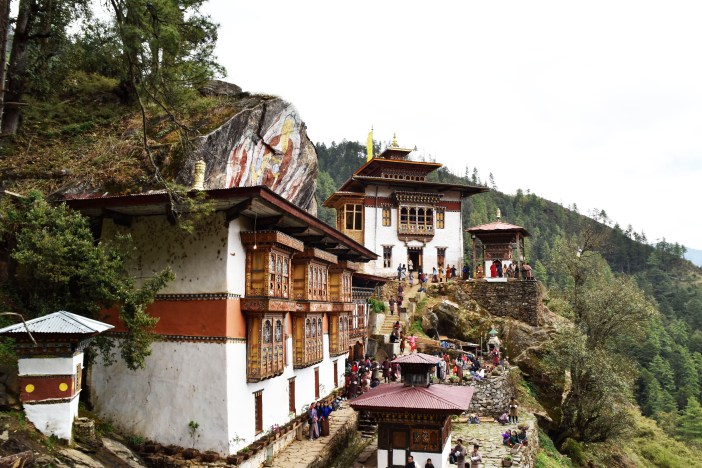 Dodedrak Monastery is greatly appreciated for its scenic beauty and for holding the insights of Buddhism Architecture, craftsmanship and mysticism. Dodedrak Goenpa is located on a mountainside about one and half hour walk the road end. The Dodedrak Temple was established in 12 th century, according to the prophecy of the Chief Abbot Yonten Thaye, the reincarnation of Channa Dorji. Channa Dorji in English translation means the “god of power and energy”. During that time, he was working as a teacher in Phajoding, and after his vision, he came to build a present temple in the face of a huge rock split in two.The temple has two alter rooms; both floors are carpeted in red color and have some 900 years old paintings on the wall. In the first temple, the view of the temples protective deity, Dorji Pelpa is engraved on the stone wall. The second alter room has statues of four chief abbot of Bhutan, where the abbot Jamyang Gyeltshen is believed to have created all the other statues the temple holds. This imprinted sketch is believed to be self created. The roof of temples is filled with remarkable mandala. There are two rock wall paintings at the entrance of the area of the temples. The extra ordinary shapes of the stone walls are believed to be natural and with the help of colors, the painted wall tells the history of Dodedrak. The second painted wall is vision of Dodedrak and it shows what the area looks like today. The temple has also paradise of Guru Rinpoche. In 1980s, the 4 th king of Bhutan initiated development of School in Dodedrak area which now consist of numerous small houses scattered in the hillside. The site is mostly residing monks.