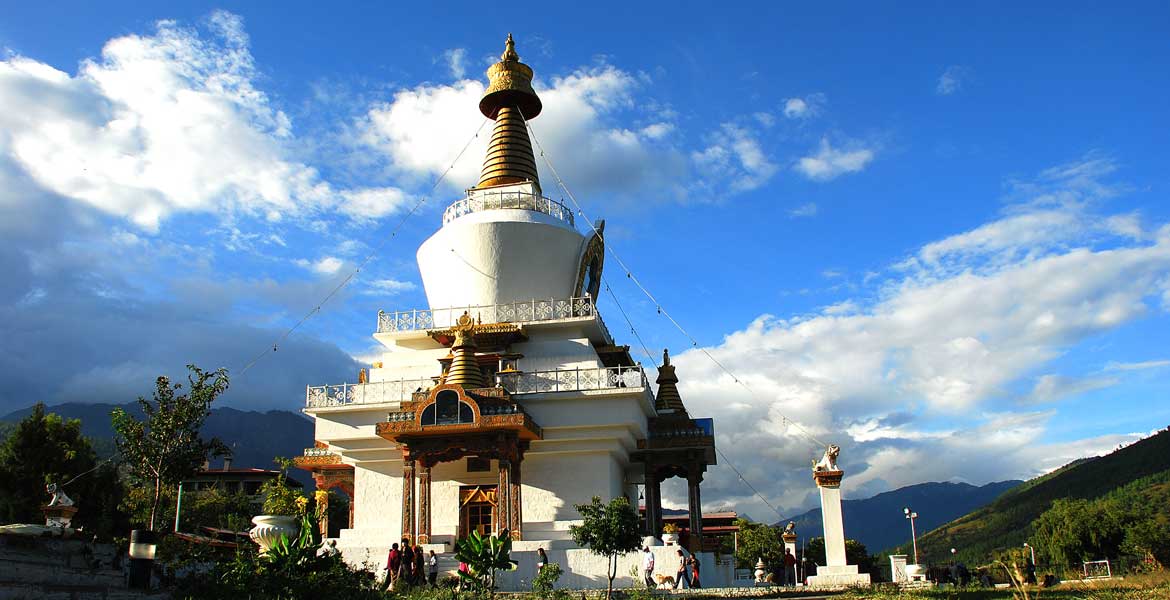 Memorial Chorten, also known as Thimphu Chorten is located on the Doeboom Road at the center of Thimphu Valley, just above the Thimphu Main Town. Memorial Stupa was built in 1974 in the memory of late King, His Majesty Jigme Dorji Wangchuk, who had leaded the Bhutan from 1928 to 1972. Third king of Bhutan is often referred by history as father of modern Bhutan, because during third King’s reign, most of the modern developments were first brought in our country. Her majesty, Ashi Phuntsho Choden was the royal patron for the construction of the Stupa. The design and structural concept of stupa was conceived by the Thinley Norbu, according to the Nyingma tradition of Tibetan Buddhism. The stupa was built according to the wish of His Majesty Third King of Bhutan, who while alive wished to build a stupa to represent the mind of the Buddha. Unlike other stupa in Bhutan, memorial stupa has temple inside. The painting and statues inside the monuments are very artistic and at the same time, provide a deep insight into Buddhist Philosophy. This Stupa is different from the rest of the stupas in Bhutan, because it does not enshrine human remains. Only Druk Gyalpo’s photo in a ceremonial dress adorns a hall in the ground floor. The architecture of the chorten was designed to present it as, “one of the most visible religious structure in Thimphu.” The memorial chorten was designed in Tibetan Style called Jangchub Chorten, patterned on the design of a classical stupa, with a pyramidal pillar crowned by a crescent moon and sun. The most distinctive feature of these stupas from rest of the stupa is outward flaring of the rounded part to give the shape of a pyramid, not dome shape as most of the stupas. The exterior or physical structure of chorten is a large white structure with a golden top crowning and a smaller spire above the front porch. The Chorten is approach by a small garden and gate decorated with three slate curving. On the exterior of the gate are representation of the three protective bodhisattvas Avalokitesvara, which symbolize the compassion, Manjusri, which symbolize the knowledge and Vajrapani, which symbolize the Power. Once inside the gate, the image of Zhabdrung Ngewang Namgyal, Buddha and Padmasambhava are found. The interior of stupa is designed in four shrines, from four directions. Each of the shrines has different pictures of the king, with the eastern shrine housing a Buddha image. The stupa has also special shrine dedicated to the Late Third King of Bhutan, which has picture of the King. The stupa is the great religious places, and annually few important religious ceremonies are held at the spot. The stupa is also center of circumambulation by the people living in and around the Thimphu, which ultimately benefit Bhutanese to uphold the spiritual journey on mission and also the as a physical therapy from circumambulation.