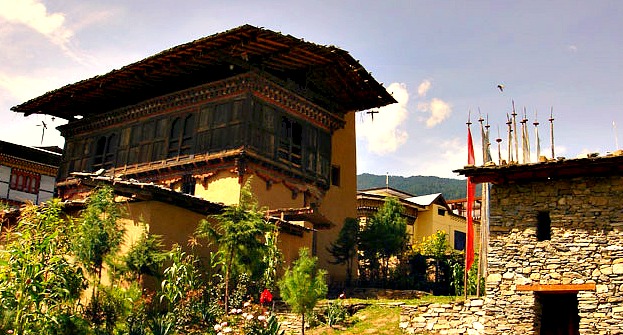 Folk Heritage Museum is also known as Phelchey Toenkhyim was established on July 28 th , 2001 with the initiative of the Queen Mother of Bhutan, Her Majesty Ashi Dorji Wangmo Wangchuk. Folk Heritage Museum as established in a historical building, which is more than 150 years old and one can see the rural setting and flovour has been well preserved in addition to the paddy, wheat and millet fields that can be seen surrounding the houses. The ground floor entrance to farmhouse is accessible via a small, partially covered, stone courtyard used to store fire wood, farming equipment and grain. The next two levels of the house is accessible via steep, open tread timber stairs in which visitors advised to take caution while between floors. The second level of the farmhouse is used primarily as a safe for grain and food. And on the third level, visitors will have reached the center of the family living and dining area. This is the only level of the homestead with heating, generated by the wood fired stove set against an external wall in the separate kitchen area. Folk Heritage Museum is located in Kawajangsa, in the heart of the capital city, Thimphu. The Folk Heritage Museum is within the walking distance of the National Library of Bhutan and the National Institute for Zorig Chusum. The museum’s main mission is to strive to disseminate the rich cultural Heritage across generation by preserving it in different forms in this era of rapidly losing cultural Heritages to the modernization. The museum is a restored three storey traditional rammed mud and timber house, which dates back to the mid 19 th century. The design and form of the museum building is that of an average household in Wang area during olden days. The age of building demonstrate the durability and performance of the building materials and architecture skills. From ground to top floor, household objects, typical domestic tools and equipments that would have been used by a family are on display. Visitor can literally visit to the Bhutan in early 19 th century era, one in the national museum.