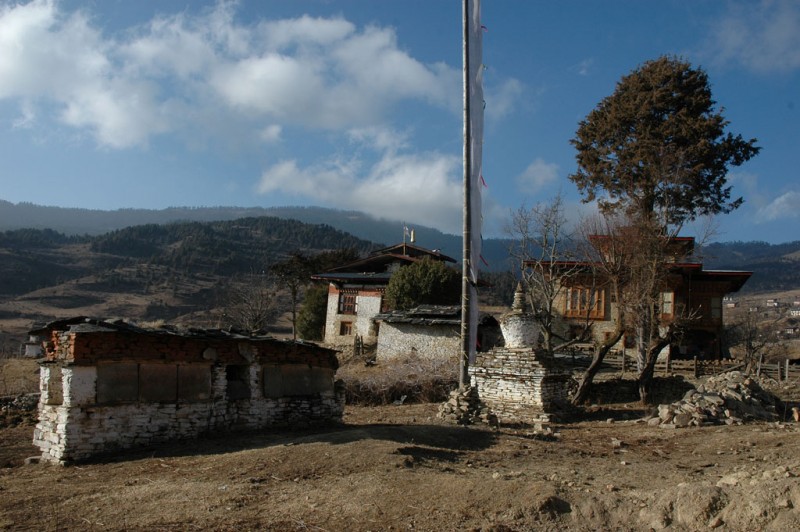 The story is told how the people of Ura prayed to Guru Rinpoche to protect them from leprosy brought on to them by subterranean spirits (lu) represented by snakes. Guru appeared in the village as a beggar and was invited to eat lunch by an old lady who was engaged in spinning wool. She made a lunch of buckwheat pancakes but was surprised to find the beggar no longer there when she called him to eat. When she returned to her spinning she discovered a statue of Chador (Vajrapani) lying within her wool basket. Two different versions exist of the subsequent history of the statue. In the first version, three days later the statue miraculously flies from the old lady’s house to the nearby village of Gadan. Another version has it that the statue was presented to the Gadan Lama by agreement amongst all the village people of Ura. When the statue of Vajrapani arrived in Gadan, a nine-headed snake was disturbed and slithered out of the Ura Valley. The place is still known as Puguyungdhogo (Place of the nine-headed snake.) Leprosy was eventually overcome in the Ura Valley by the blessings of Vajrapani. This sacred statue is kept the whole year in the house of the Lama of Gadan outside the village proper.

The prayer-wall near the temple has beautiful engraved slates inscribed with texts and the statue of Vajrapani is the most sacred image. The temple is a family temple looked after the head of the lineage. It holds a festival the Gaden Choepa . The venerated statue of Chador is brought down to the village temple on the occasion of the Yakchoe festival performed in front of the Ura village temple. The first day the statue of Vajrapani is taken out of its house in Gadan and brought in procession to the old woman house in Ura village and goes back to Gadan the last day of the festival. During this time, the central figure of the festival is the Gadan Gathpo (“the old man of Gadan”) who is at the same time a bawdy jester and the host of the festival. With a black wrinkled mask, dressed in dark woolen cloth and waving a wooden phallus, this figure has the heavy responsibility of the smooth running of the festival.